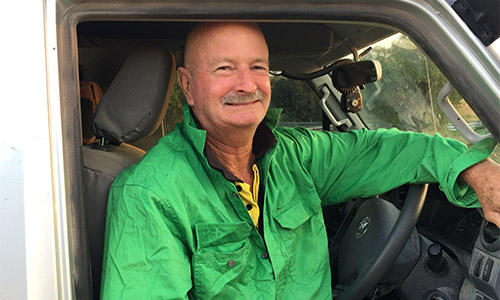 Mick & Barb Davis farm in Western NSW at Myandetta Station near Bourke. Mick is passionate about the Poll Merino fibre that he is producing in an area mainly dominated by Dorper breeders, which he just can’t understand.” The profit drivers out here are from lambs on the ground, selling plenty of surplus sheep and producing a lot of good quality wool”. He learnt to wool class at a young age and just loves working with top quality wool. Mick and Barb bought their first Roseville Park Poll rams in 1988, purchasing as many Poll rams available back then as possible after seeing the benefits of the hardy types being produced by the Poll Merino sires.

Mick achieves an average of 120% weaning as a long term average, with some year’s reaching over 130% across the station. He attributes this to the factthat in the extremely hot Western environment, the rams are well prepared and he joins the ewes off shears in January for a lambing in June/July. “The ewes bounce away after they are shorn and handle the heat better and maintain a cooler body temperature”, Mick says.

The professional sheep classing has been carried out by Allan Clarke, Dubbo for over 30 years. Initially, the sheep were based on a Riverina bloodline and the type of sheep, along with the wool needed a lot of work. They had a lot of structural faults and the wool was very harsh. Allan selects high growth rams,with big long, deep bodies with wool that is nourished, soft and bright that will handle the Western country and environment. “The wool needs to repel the dust on the red country and with the extra nourishment in the tip, it keeps out the dust and sticks. There are no problems with flies and even with a summers hearing, the wool yields extremely well”. Allan says.

Mick and Barb have entered fleeces at Bourke show over the years with great success as well, proving that Mick’s passion and eye for good wool is paying off!